on rings, things, and the Gospel 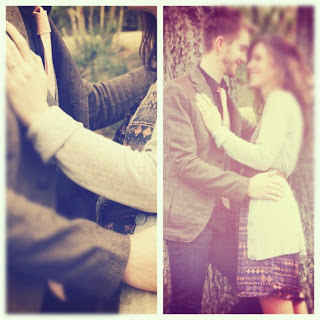 i used to tell B that I didn't want a typical engagement ring; that instead, i would rather have a super thin, diamond eternity band. the day he picked me up and whisked me off to an estate jewelry store was the day i tried on the ring that i currently have on my finger. although it wasn't a simple band, it was beautiful, and antique, and unique, and really, really...ahem...expensive.

it really wasn't all that expensive. it was actually wayyyy less than what he had planned to spend. so affordable in fact, that he made me try on more expensive rings because he couldn't bring himself to buy his future wife a ring that cost as much as the tv he bought a month prior. although the other rings were bigger and flashier and more expensive, i fell in love with the cheapest one i tried on. i honestly just liked it the best. go me.

since being engaged, i've heard both Christian extremes on all things nuptial; one of the extremes claiming that engagement rings are merely materialistic and that people should forgo them and be more concerned with their marriage and the Gospel. excuse me, whaaa? who says you can't be focused on the real meaning of marriage and have a diamond ring on your finger? to be fair, i get where they're coming from and i think they're right about a few things. engagement rings are a materialistic thing. and people do need to be more concerned with the Gospel. but in one sense, the sense that flows from one sense right into the other, i believe they're a little misled.

but yes, our culture has it's traditions and concepts of what those traditions should look like-- especially surrounding marriage. i glare every day at the average $26k price tag of what the world says my wedding "should" cost. upon my own convictions, there's no way in Sheol i'd ever spend that much just to say "i do." but i also won't sit around and insinuate that couples who have $26k weddings are less Gospel centered than those who don't.

the only thing that makes someone Gospel centered is the Gospel. the Gospel isn't constrained by our prosperity or by the lack thereof-- the Gospel is about Christ.


i think the principle that's being missed in all of this is that it is never about things. it's never about having them and it's never about not having them. it is about Christ. it is about being content in Him and counting all else as rubbish compared to Him (phil 3:8). we should hold onto things loosely, but it is OK that we hold them if given to us. they do, after all, come from Him. as long as Christ is our identity and the Spirit gives us the go-ahead, we can have a Gospel centered marriage and a ring, too-- "for from him and through him and to him are all things."

i wanna hear your thoughts on this y'all...if you're out there. how do you remain Gospel-centered in the midst of a consumerist, materialistic world? is there a "balance" we should keep or should we really turn our back on it all?

and brides or bride-to-be's: how did you or how do you keep perspective while rearing heads with the wedding industry? is there anything you forewent in order to maintain a holy perspective?