I’ve heard it said that nothing good comes after midnight.
Whether you’re trying to write a paper for English class or hanging out with a friend in the computer lab spouting off such phrases as, “dad gum,” “golly nads” “golly gee” “golly gee wiz” and “word vomit,” all the while laughing a ridiculously obnoxious laugh, I think it would be a fair thing to say that everything usually does tend to come out in moron past midnight.
Needless to say, your guard comes down.
Now, whether that’s actually a good thing or not, I’m not sure. I guess it potentially lends itself to flippancy, as was case in point this evening, but sometimes it can very well lead you to sit back and listen to a story of how God saved a life, changed a life, and how He’s continuing to use that life for His very own glory and good purpose.
It beckons me to wonder about the story God has written for Himself through my life or at least through this chapter of my life. I don't really know the plot, the chapters or even all of the characters just yet, but He does. He's already finished the book.
I have hopes of being involved in music here at Liberty in some way, shape, or form, but lately what God's been calling me to do is cast down my imaginations and instead focus on how I can worship Him with my resources and with the opportunities He's already given me. What does it matter what we do, just as long as we’re committed to doing whatever it is reverently and passionately for the glory of God?
I have a call to be faithful and obedient, this much I know. To go when and where He calls, and to trust Him with the rest - and trust Him, I do. I am completely content at where He has me now.
I had to sacrifice a lot to be here. Most certainly I haven't sacrificed as much as others have, but I have had to trust Him while dying a few little deaths; my finances being one of them. I need a way to get money for school and a way to be able to pay it all back after school and I’m not sure how getting a degree in worship is going to help me with any of that, but I’ll be committed to it until the Lord gets me to that point. He's given me resurrection power and I believe He can resurrect me out of debt.

Like I said. Nothing good.
Getting this degree in worship has not only led me into debt, but it's also caused me to drop the opportunity to lead worship every Sunday at Aletheia, in hopes of gathering a clearer view of my Savior and a deeper understanding of worship here at Liberty University. It's bittersweet, really. I fully know that I may not even be able to lead worship while I’m here. In fact, I could have very well sacrificed a great opportunity to lead worship, for a lesser opportunity to lead worship. Let’s face it: I’m a small fish in a big pond here and God is on everyone's side.
Like I've said in previous posts before, I wish I knew why I was here. All I know is that He called, and I followed. No questions asked.
When Christ called out to the fishermen who would soon become His disciples, He gave them no other instruction than, “Follow Me and I will make you fishers of men.” (Mat. 4:19) They already knew how to fish obviously - they were in the middle of doing so when He called out to them. But even still, God called them to follow Him so that He could make them, teach them, and prepare them to trust - to walk in faith and not by sight - so that they would be able to fish in an entirely new way; to fish in a way that they never could have expected, to fish in a way that they never would have been able to had they not dropped their nets, left their boat and sacrificed the act of fishing for game, to develop what it would take to fish for glory.
Now, I know that it's currently 4 a.m. which is welllll past midnight, but can you see where God could possibly be going with this?
I think I might have an idea as to what God is trying to do with me, but then again, I have to stop and remind myself that, "No eye has seen, no ear has heard, no mind has conceived what God has prepared for those who love him." (1 Cor. 2:9)
No, I haven't a clue.
All I know is that as they were following Christ, the disciples didn’t look back to see an empty boat or a bunch of empty nets on the ground and regret it. They were way too busy setting their eyes on Jesus and His kingdom.

"But seek first his kingdom and his righteousness,
and all these things will be given to you as well."
-Matthew 6:33 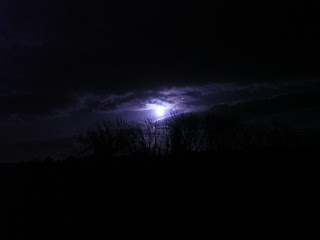 Nothing good after midnight?

Negatory.
God is always good.
-C
Posted by Chelsea Cline at 4:10 AM