New Developments (and some not so new)


My car is dead. big time. It completely shut off on me as I was sitting in the left-turning lane in the middle of Wards Road. It was so dead that the dumb thing wouldn't even let me turn on my caution lights. I called my brother up on the phone as I preceded to sit through four rounds of light changes until three really great college guys pulled over in the median, ran out of their car, dodged traffic and started yelling, "PUT IT IN NEUTRAL!!!"


Before I knew it, I was moving across two lanes of traffic and pulling off onto the side of the adjacent road where the guys kept checking to make sure I had someone to come get me. my life is so romantic. 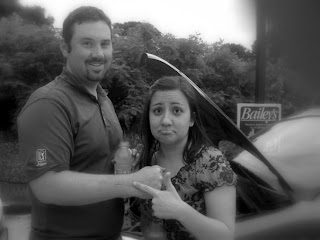 Jason came around the hill in his big 'ole red truck, checked a few things under the hood (and cut his arm doing it - SUCH a stud) as another car pulled over to help as well. Ryan was a firefighter and had pretty red lights in his car, so he turned them on and started directing traffic as Jason swung his truck around closer to hook jumper cables up to charge my not-even-a-day-old battery. Turns out the guy who put it in this morning broke a part that's needed to ensure that the cables are securely hooked up so that the battery charges. Loose cables equal no charge, which equals a fried alternator, which equals no car for a while and a lot of money I don't have.


Two hours later, after three different breakdowns and three different jumps, we finally get Lil' Blue back to the apartment where she will be hauled off to the Valley in the morning to get fixed up. Mom is going to teach me how to quilt and I'll get to sing at Aletheia Church for what will officially be the last time...


Which brings me to the third new development:

I went to two different churches this past Sunday and after all was said and done, I felt pretty certain of which one I wanted to call "home." My friend (and amazing hairstylist) Salem accompanied me that day and introduced me to one of her friends, Aaron, at Brentwood. On Monday, I get a friend request from said-guy and a message saying that he found my ministry team audition videos. He then continued to ask if I would be interested in joining the team. Huh. That's interesting.*


God uses the most mundane things to achieve His will. The ministry team videos were put up for the final round of auditions to make a ministry team at LU (closed door) and here God wanted them for Brentwood all along (opened window). I got a call yesterday confirming that it was a done deal and was told (as if I hadn't already realized) that it was totally a "God-thing" because their female vocalist is moving and they've been auditioning female vocalists to take her spot for the past few weeks and hadn't found the right fit yet.


faithful. For twenty-one years my mom has been waiting for my domestication gene to kick in and in the same day that it does, God had exactly the right people come along to make sure that I wouldn't become road kill in the middle of Wards Road. In being ever so faithful to my mom's hope and dreams of having a daughter who shares her love of quilting, and ever so faithful to provide for, protect me, and bring me home safely, He also has finally - in His own, perfect, sweet, time - given me a home church here in Lynchburg and an opportunity to worship Him in song, to sing His praises, and to lead others to do the same.
He called. I answered. He did it.

"He who calls you is faithful; he will surely do it."
-1 Thessalonians 5:24
God had a master plan specifically created for each and every one of us before He ever even laid down the foundations of the earth (Jer. 29:11-13). To see it come to fruition we must continue to follow His calling even when things become lackluster or gray. We don't give up. We keep running. We keep responding to the revelation of God as we wait on the LORD. He will bring it to pass, because His faithfulness...well...

His faithfulness is nothing new.

Posted by Chelsea Cline at 1:41 AM