I cook Cajun food now, which I guess was bound to happen at one point or another since I have a boyfriend who grew up in Louisiana... (and because if I didn't, my roommate would dominate for the title of best cook in apartment 508. Mmm. Not acceptable). 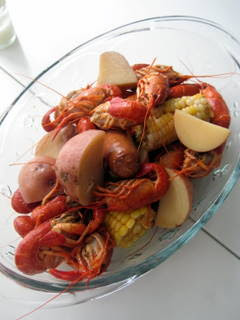 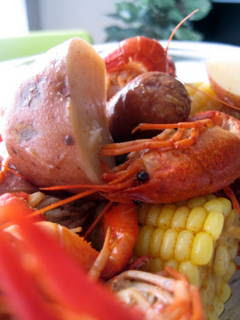 ...And I apparently make Cajun casseroles out of the leftovers: 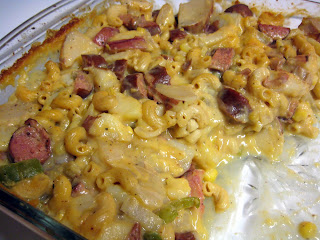 Essentially I just took what was left over from our Crawfish boil (Potatoes, Smoked Sausage, Corn, all boiled with Old Bay seasoning) and threw it in a casserole dish. I didn't put any of the leftover Crawfish in there because I wanted to marinate them to make Etouffe for another time (which I have a recipe for) and so not to waste good Crawfish on my first casserole experiment.

After cutting up the potatoes, sausage, and corn, I cut up one small white onion and a green pepper from my dad's garden, added some elbow macaroni, Cream of Celery, Cream of Chicken and some milk. I put a little more Cajun seasoning in there with some Onion Power and garlic and then gave it a generous helping of Sharp Cheddar Cheese and Aaron and I ate it tonight for dinner. As you can see, we pretty much killed it. It was actually amazing, but I guess you can't really go wrong with casseroles. Especially when they're Cajun. 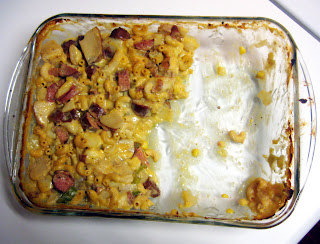 Another change that has my feet hurting all the time is my new job at the Liberty Bookstore. It's actually great, and although it can be tedious sometimes, I don't have to wear a uniform and I don't come home smelling like fried food. Another plus is that I'm surrounded by books, and I get a 25% discount on textbooks for class and 35% off anything on the top floor, including their books, merchandise, and Starbucks coffee :)

It's super exhausting and my body isn't quite used to the 4 a.m. wake up call yet (I work morning shifts which begin at 5 a.m.), but I love it because I get to leave at 10 am and I have the rest of the day to just chill.

Working there has also led me to make another change...

...and that would be my major.

I ended up switching my major back to a B.A. in Philosophy and Religion and I couldn't be anymore excited about the change. Working at the bookstore and seeing all of the amazing books I'd be reading if I were a Religion major made me really bummed, so I ended up switching a couple days ago. I did some math and figured out that it'd take me three years to graduate if I were to stick with the Music degree (I need SIX semesters of choir! Absurd). I have 76 credits so far, which puts me at Junior status. There's no way I'm staying three years just to take choir. Heck. No.


So that's about all that's going on here in Lynchburg. I'll be working six days this upcoming week, but I get tomorrow off, which means I'm heading home to Harrisonburg to see my Aletheia Family. It's been forever.