I've never been one to celebrate monthiversary's, but somehow B and I ended up celebrating them. On our first month he showed up at my door with a single, pink rose. The next month, two. The next, three. And the tradition just stuck. Finally this week, I have a half dozen roses on display-- as well as a venti-sized Starbucks cold cup and a 17-minute piano instrumental track he recorded just for me. He's seriously the most thoughtful, most talented person I know. 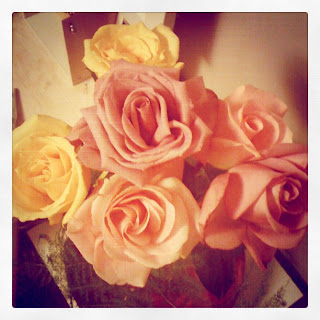 I ended up making him some string art to hang up in his office at Liberty-- inspired by an artist I found on Etsy. I bought a wood mount at Michaels, stained it a dark walnut color, then nailed an outline of the state of Georgia onto it, filling it in by wrapping jewelry wire from one nail across to the other, and then somehow configured a heart out of nails and wire to mark Atlanta-- the place we met. I brought him into the dining room where I had it hanging on the wall, covered his eyes, and when I had him facing it, I took my hands away and the first thing he said was, "a frog??" 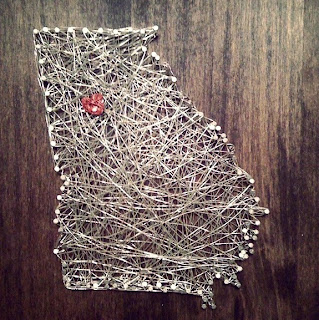 I don't know. Maybe it does look like a frog-- but at least he loved it once I explained what it was. I could hear him out in the living room examining it, exclaiming a "huh!" and a "you're so creative!" every now and again. He's cute.

After exchanging gifts, we settled in and spent the rest of the day watching LOST while drinking homemade cinnamon dolce chai's (another gift to him). We only took a break from the t.v. long enough to make pancakes, eggs, and bacon for dinner, and then back to being lazy we went.

It's great being in a relationship with the right person.
So great.