Mom scheduled an appointment at Dr. Gate's office for me today a few weeks back to get my vocal chords checked out. It was a miracle that I even got an appointment on such late notice, not to mention during the holiday season. Our insurance goes bizerk after December, so if I wanted to have them cover my appointment I had to get in before the end of the year.

I didn't give a second thought about getting my vocal chords checked out. I knew they scoped it, but somehow I never thought about how they actually went about doing it - so I got on youtube a half hour before leaving for my appointment and found out that they shove a tube up your nose and down your throat.

The thought of it alone made me sneeze, cry, and gag all at the same time.

I debated for about five minutes if I wanted to be brave or not, but I've always been partial to the cowardly lion. Actually that's false. I was all about those glittery, red high heels and the pigtail wearing gal that wore them. I wonder if she ever got her vocal chords scoped out?
So - I need not drag this out any longer than need be: I called and canceled my appointment with hardly ten minutes to spare.

When I got home, Dad said that they numbed your nose and throat and that you hardly felt a thing. He made it sound like a breeze, as did some of my friends who've had it done on facebook later that day.

He's not kidding. Dad's about the biggest baby in the world. Come to think of it, I think he actually had agents knocking on his door wanting him to play the part of the cowardly lion. Obviously, he was too scared to do it.

I'm not helping my case here.


Not that this is going to help my self-esteem any, but instead of going to my doctor's appointment, I started to read Twilight. I found myself skimming and skipping over pages though, so don't be so quick to judge me yet. It's actually been really difficult to get into. I don't know if that's because I've already seen the movie or what, but I found myself looking through my library here at home for a replacement read.

Sorry, fellow Twilighters -- I'm just not pickin' up what you're throwing down. In fact, I'm starting to think there's a reason it's been thrown on the ground.


So I fell asleep (okay, now I'm just being mean), and after I woke up I started working on my gingerbread house as was suggested as a to-do on my to-do list. 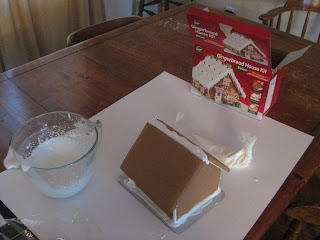 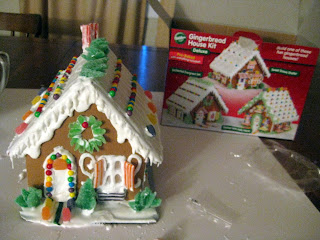 (attempted being the key word).

It wasn't really as fun though.

I was at the Ministry House pretty much all day by myself, with the exception of Asher who was just as bored as I was except a little more verbal about it. I did let my frustrations out on Byrd's camera however, which was conviently sitting on the coffee table infront of me. I recorded a little video that can easily be summed up in about ten so's for every bored.

My advice to you?

Don't get fired if you can help it.

So! Progress on the list so far is as follows:

3) Meet someone on a bus and take a picture
4) Treat someone to a random act of kindness
5) Make homemade dog treats
6) Take Asher to the groomer and have Lauren pay for it
7) Make homemade playdough
8) Throw a Rosie O'Donnell Party
9) Stuff a Turkey
10) Go hunting
11) Dig a hole
12) Put on a puppet show
13) Make a pillow case (I'm counting the bedspread as a pillow - a really big pillow)
14) Make a video of my day (Even though it was totally lame)
15) Try to make as many different kinds of hot chocolate as possible
16) Make a gingerbread house
17) Handwrite letters and mail them to people
18) Cook Weiner Schnitzel
19) Give a tour of New Market
20) Memorize a Psalm
21) Read both Twilight and New Moon (Can we please just say I did?)
22) Cross stitch a picture
23) Put together a Science Project
24) Punk someone  (I'm thinkin' Asher counts)
25) Make butter
26) Can something
27) Make popsicles
28) Research another religion
29) Buy black socks

Posted by Chelsea Cline at 2:39 AM